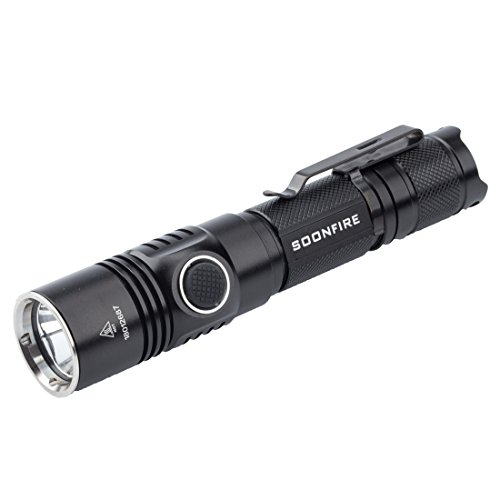 One thing that is of high demand when it comes to mechanic flashlights is versatility as well as a wide array of uses. The soonfire tactical flashlight contains both qualities, as they are powered by either a rechargeable lithium battery, which it comes with, or it can be powered by CR123A lithium batteries which can be bought separately. This is good because if you run into a situation where the rechargeable battery runs out of power, it can be easily swapped out for the CR123A batteries. Another nice thing about the soonfire tactical flashlight is that it is waterproof. This is great for when you are camping, lose something in a body of water, and need to find it.

The brightness levels of the Soonfire tactical flashlight can leave some things to be desired. It has many, many levels of brightness, going from a minimum of 8 lumens to a maximum of 1050 lumens. While this offers a lot of range and can be quite useful, it can also overwhelm a user. How many people who use tactical flashlights are going to need this many brightness settings? Another thing that brings up a concern is that while it comes with a chargeable battery, the Soonfire tactical flashlight does not come with a wall charger, only a USB cable. This can cause inconveniences when charging, as you will need to provide your own charging device. 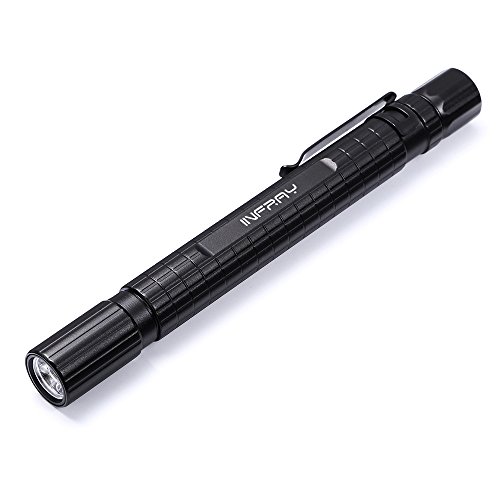 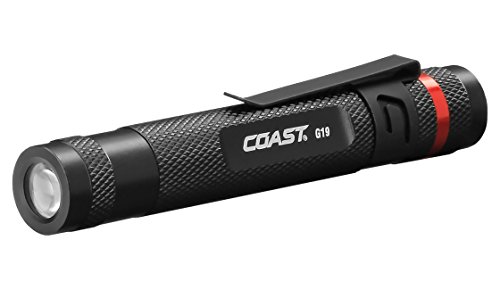 Flashlights should be built and designed to stay intact whenever it is dropped, or is met with any other kind of impact that could shatter something. The Coast penlight is built for such a reason, as one of the most redeeming qualities about it is that while it is very small it is compact, crafted from aluminum. This makes it durable and if it is dropped from heights under a meter in length, it will not shatter, dent, or break. There are some other redeeming qualities about the Coast penlight, as it also water resistant. It also uses only one AAA battery, which is included, and also comes with a clip which makes it easy to carry.

The Coast penlight is designed to be carried easily and used easily. It is also designed for people on the go, as it only uses one battery. There are some things to be aware of when it comes to this particular flashlight. The first is that there are no settings. It only has one setting which produces a distance of 65ft of light. This light only lasts for a little over two hours, which means if you intend to keep it around and know that you will use it often, you’ll need to have some AAA batteries on hand. This makes things a little less than convenient. The fact that it has exactly one setting is also concerning, as it takes away from the versatility. 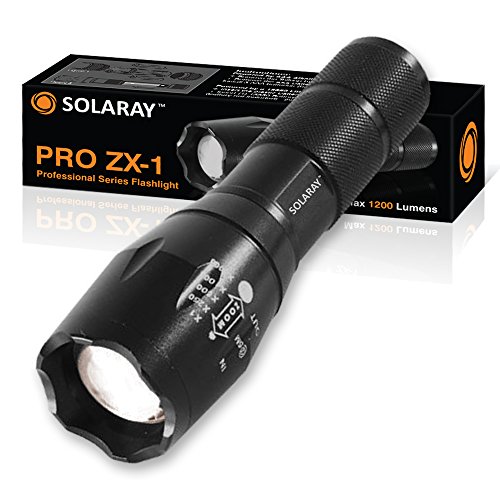 When it comes to tactical flashlights, there is usually a “sweet spot” when it comes to settings. If a flashlight has too many settings, it can overwhelm or confuse the user. If it has too few settings, the flashlight won’t have enough uses and it will leave users looking for another flashlights. The Solaray tactical flashlight has figured out this “sweet spot” as it has five light modes. This makes it versatile enough for many uses, but users will also not be confused by too many settings. Like many other flashlights, it has a zoom function for the lighting as well as water resistance.

The Solaray tactical flashlight functions very well as an all purpose flashlight. The way it is powered, while convenient, is questionable. It comes with a rechargeable battery or you can put AAA batteries in it. So far, this is very standard when it comes to tactical flashlights. The confusion comes in charging the battery. The user guide reads that if you charge the battery overnight, it will provide too much power and the battery will explode. This almost defeats the purpose of even having a rechargeable battery, as this should never be a precaution when it comes to anything that can be recharged.

The Coast HP1 flashlight proves its worth when it comes to being impact resistant and being easy to carry. It is a solid flashlight for outdoor adventures during the night or navigating through dark rooms. One thing that would make it perfect is the versatility in settings, in which the Coast HP1 leaves quite a bit to be desired. It has a slide focus system which zooms the light, but this is standard for many flashlights. It allows users to shape the beam themselves, but there are no physical settings. This makes things inconvenient as far as settings are concerned.